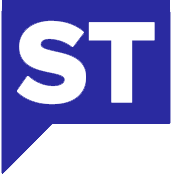 Shares of consumer electronics giant Apple Inc. are in focus.  The company has seen negative headlines as of late regarding supply risks from its most important manufacturing facility run by FoxConn.  Last week the stock reacted negatively on various news reports and videos of protests and walkouts due to poor working conditions and COVID lockdowns.  Investors are paying close attention to the news flow out of China and risks have increased to the safety of Apple’s main manufacturing facility and supply chain.

When looking at the fundamentals, Apple remains in a strong competitive position.  The company does not discount much over its product offering and sells most of what it produces.   As well, Apple has built a growing services revenue stream from its cloud based offerings.   While services are growing we note that Apple’s main revenue source is still the iPhone sales accounting for 50% of total revenues annualized.   With supply chain risks and now risks of its main manufacturing hub in lockdown we can see how the market is pricing in downside risk in the stock.  There could be a meaningful downgrade to forward earnings estimates if the COVID lockdowns and manufacture facility unrest continues.

Technical Analysis shows an interesting setup and correlation with another mega cap, Tesla Inc.   We pulled up the weekly close chart over a 3 year timeframe and find similarities.   For Apple, it is showing near term weakness given that it is underperforming the recent markets rally from the Nov 10 FOMC announcement.   We also can see the major moving averages are starting to converge and cross below each other which is a negative development from a sentiment standpoint.  For the past 4 weeks the price action has held below the declining 20 week moving average.

Now looking at Comparative Analysis when we put the chart of Apple and Tesla beside each other we can see a similar setup brewing for Apple as to what occurred with Tesla.   We noticed Tesla price action confirm a failure below its declining 20 week moving average in July after a multi-week battle in that price zone.  After a brief recovery above the 20WMA price ultimately failed again at the stronger 50WMA and broke down below the 100WMA a few weeks later after the moving averages shifted to a negative convergence.  We can also see the price action of Tesla was consolidating lower through a broadening wedge formation highlighted by the support/resistance zones.  This is a similar pattern in which Apple has produced over the same timeframe.   When Tesla broke below the 20WMA it proceeded to decline another 20%.  Apple is showing very similar price patterns and is at risk of breaking below the 100WMA.

Apple is on the cusp of a similar move to which Tesla showed and could be triggered on continued negative China news flow, a topping out of recent market upswing or a negative response by investors to upcoming FOMC Meeting.  We await the trigger event to place a short or put position in Apple but it is certainly on our radar. 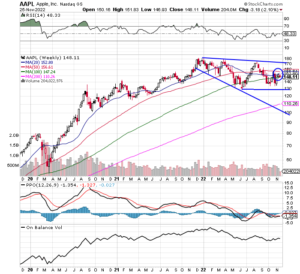 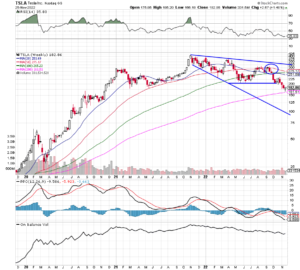