Our overall Primary Trend Indicator remains Neutral.  We have been in a neutral stance for over 1 month now but believe that equity valuations are stretched while global economic conditions remain subdued.   Consumer spending remains strong with Unemployment at historically low levels.  US Fed Policy remains highly accommodative and other global central banks are actively stimulating financial markets such as Japan with the BOJ being a net buyer of foreign securities.

We now must contend with the impeachment of President Donald Trump.  Expect to see increased volatility heading into 2020 and the US Election

These credits were previously extended through the end of 2017, though that time the extension was retroactive, as taxpayers didn’t know about the incentive during the incentive period.  Now, those credits have been extended retroactively again — covering the last two years, since 2017.  They’ve also been extended forward through the end of 2020.  This is great news for companies in the EV and fuel cell stack businesses such as Tesla and Ballard Power.

The US Government is poised to spend more on the buildout of infrastructure which includes features in EV.  Tesla is benefitting with sales of its EV models ramping higher.  Of significance is the companies nationwide charging network of over 15,000 charging stations which is in itself a major asset.  With the added benefits of the US Spending Bill companies pioneering EV and fuel cells will see investment.  Tax Spending, as a component of return modelling, is increasingly important when trying to extrapolate a valuation or return potential.

The price action of Tesla says it all with the stock hitting new record highs.  Stocks do not stop and immediately roll over at new highs.  They need a negative catalyst or changing fundamentals to do so.  Smart investors know this old adage, and any pullbacks in the stocks price over the near term should be met with buying.   The stock could pullback into the $380 range on a test of the old highs during which could be a good entry point for investors who believe in the continued bullish market cycle for the sector.  Thankfully our subscribers and followers have been hearing of our favourable view on Telsa stock since $240.   Our datasets still show considerable upside over the next 12-18 months. 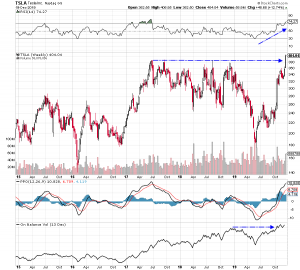